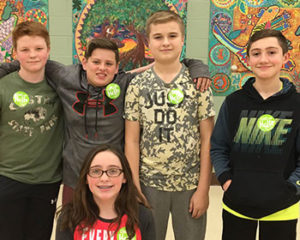 Gardner-Dickinson joined hundreds of schools across the country this past week by participating in Start With Hello, a program that confronts social isolation in schools.

The program, created by Sandy Hook Promise, encourages students to reach out to classmates who may feel isolated and create a school culture of inclusion and connectedness.

The school began Start With Hello a week earlier when School Counselor Amy Murphy visited classrooms to teach students how to recognize and reach out to classmates who may be isolated.

“Start With Hello fits in perfectly with what we try to do at Gardner-Dickinson,” said Dr. Yodis. “We were able to take advantage of Sandy Hook Promise’s resources and use them for one of our main district goals, building a culture of acceptance and tolerance.”

Throughout this past week, team building exercises helped students work together in small groups that were randomly assembled. Activities such as writing song lyrics, Lego building, and playing games encouraged students to interact outside their normal groups of friends.

Ms. Murphy organized Mix It Up lunches where students had to eat with someone different. Students were given ice breaker questions to ask each other, quickly finding out that they had more in common than they thought.

In the classroom, teachers incorporated Start With Hello in their daily lessons. Fifth graders in Dan DiSotto’s class, for example, partnered up with different classmates and used icebreakers to get to know each other before working together.

“Students found they had a lot of things in common that they didn’t realize,” said Mr. DiSotto. “Even after a few days, you’re seeing students in line asking how they’re doing because they now have a connection.”